In The Weave, the witch Ombrine uses a number of poisonous plants to create her potions, curses and magical deaths. Here is a scene from the book where, in 1605, she is teaching Oskar some of her herbal lore. She was particularly fond of using Wolfbane and Belladonna

“Over the next few days she taught him how to make …
The Dream Maker, made from a blend of Wolfbane, belladonna and the tiniest pinch of Datura, which acted on body and mind to fire off images and illusions drawn from the darkest, deepest emotions within a man’s soul.
‘You have to be very careful with Datura,’ she warned him, ‘since it is several times more poisonous than the other two… unless of course you want your victim to die a terrible death.’ She paused, giving him a gleeful smile.
‘You remember that captain in Hamburg? I slipped him a little too much after we parted him from his cargo of silk. A mistake on my part, I admit, but I am not one to have regrets. He was a coarse, base creature. No loss to anyone. I confess, I laughed when he hauled himself to the top of his ship’s mast thinking is was a ladder to God and then threw himself off, believing he could fly with the angels. Yes, this is one to be careful with.’
Then there was the Standstill, made primarily from monkshood and used to excite the blood and brain. Paralysis of the body swiftly followed but consciousness remained…”

Wolfbane (aka Monkshood) with its striking blue cowl-like flowers is highly toxic and has been used in times past for both hunting and warfare. In ancient & Chinese medicine, Wolfbane was used to slow the pulse and act as a sedative. And should you have a sudden need to detect a werewolf it is said that if you hold the flower under the chin of the alleged werewolf and a yellow shadow appears you know you need to get that silver bullet ready. Alternatively it used to be the fashion that you wrapped up the seed of Wolfbane in a lizard’s skin and wore it around the neck, as protection. 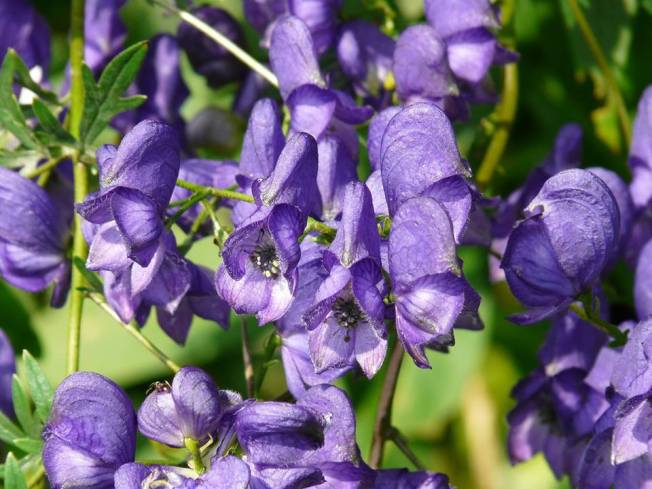 Belladonna has many names including Witch’s berry, Banewort, Black Cherry, Deadly Nightshade, Death’s herb, Devil’s Cherries, and Fair Lady. You can guess what a poisonous plant it is just by reading these names, While Belladonna is beautiful plant it is also quite deadly. It induces among other things hallucinations, psychic dreams, delirium and a seriously painful death.
Its common name- Belladonna – comes from an ancient cosmetic practice. Apparently women used drops made from the plant to dilate the pupils – an effect considered to be sultry and sexy.

Datura, also known as Devil’s Trumpets is a beautiful plant. It is highly toxic, hallucinogenic and deliciously scented. Due to the combination of chemical substances it contains, Datura can induce, among other things, delirium which usually incorporates the inability to tell reality from fantasy, muscle stiffness and temporary paralysis and memory loss.

So what does Oskar do with his new-found knowledge and skills? You’ll have to read the book to find out! Out in mid-November.

A Romany witch, a French count and English author all entangled in a centuries-old web of lies and deceit