The beautiful medieval Cité of Carcassonne offers rich pickings for a writer of ghost stories and things supernatural.

Within the walls and narrow streets of the Cité phantoms wail, weep and wander, fairly aimlessly by all accounts; cowled monks manifest only to disappear through walls but the tale I particularly like concerns a large well – The Well of the Fairies – which was one of several providing water for the inhabitants. 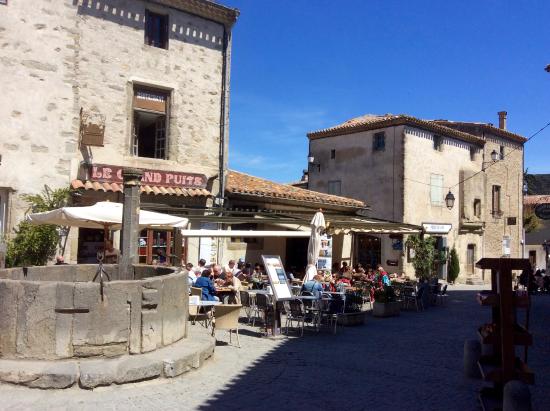 This photo of Carcassonne is courtesy of TripAdvisor

One dark night back in Medieval days seven archers went on a bit of a binge, roistering the night away in a number of local taverns. Well and truly sozzled they tumbled out of the last ale house and wandered through the deserted cobble streets. Filled with boldness and courage (I’m told drink can do that)they began to chunter among themselves and during their grousing and grumbling they were extremely rude about the patron saint of the Cité, St Gimer, the first archbishop of Carcassonne. They then compounded their discourtesy by dissing the Devil and all his powers.
As they stopped to draw breath after all their shouting and hollering, they noticed something just ahead of them in the narrow street – a donkey no less and one that was blanketed with a rich (and no doubt valuable) cloth.
It did not seem to occur to them to wonder why a richly-clad donkey should be wandering the streets of Carcassonne at that time of night rather they grabbed hold of it and one by one scrambled on its back. As each archer jumped onto the animal, it performed an extraordinary anatomical feat – that of stretching its back so that each man could be comfortably seated. Once all were aboard the donkey set off at a fair old pace, the archers whooping with glee. The donkey headed for the cemetery where the gleeful whoops turned into cries of terror as one by one the graves opened up and their occupants moaned a piteous lament.
‘Sacré bleu’ (and other appropriate French oaths) screamed the men, ‘it’s the Devil himself’ and they tried to dismount and flee but strangely they seemed stuck to the donkeys back by some sort of supernatural glue. The beast then whipped round and charged back through the streets to the great well in the square. There it plunged down the well with its doomed cargo who were never to let loose an arrow again.
If, one stormy night you dare to approach the well, you may find it lit up by the fires of hell and hear the heavy groans, moans and pleas of tortured souls rising up to greet you and if by chance, you are there when the clock of the church of St Nazaire strikes midnight, you too may find yourself transfixed with terror as the chimes resonate with the shrieks of the damned.

Bit of a wicked glint?

I hate to say it, let alone write it but there’s a hint of a twinge of autumn in the air here in the Languedoc. Days are warm and sunny but there’s a bit of a chill in the evenings now. Summer plants are starting to give up the ghost, many of the second-homers have packed and gone and Vincent, the local log man is busy trundling up and down the street with a lorry full of logs. My turn came this morning when 4 cubic metres of beech logs were tipped in the orchard ready for barrowing up the path to the log store. An hour or so later, bowed of back and cronky of knee I sat drinking a reviving something-or-other and started thinking about filling the freezer for the winter to come. From there it was a hop and a skip to thinking about cassoulet – that iconic dish about which there is much controversy. Mind you that’s not saying much; as someone once said, put four Frenchmen together and they’ll have no difficulty in holding six different opinions.

Cassoulet, if you haven’t been introduced, is a thick, heavy stew comprising haricot beans (about which variety there is also much dispute), duck confit, garlic sausage and pork. That is if you are an aficionado of the Castelnaudary cassoulet (the birth place of cassoulet if its citizens are to be believed). On the other hand, should you vote for the Toulouse cassoulet you would have the eponymous sausage, mutton and goose whereas in Carcassonne there would be the addition of partridge, especially in the hunting season. So you pays your money and takes your pick.

Castelnaudary’s claim derives from the story of how during the misnamed Hundred Years war, (1337-1453) the Brits, led by the Black Prince, besieged the town. Its good men and, more likely, women gathered together all the remaining bits of food and decided to make a huge hearty stew for the soldiers defending the town. So hearty and fortifying was it that it promptly resuscitated the soldiers’ derring-do and they gave the old heave-ho to the Brits and saved the city from British occupation – shades of Monty Python.

Another more prosaic view is that it is a melange of culinary cultures including Arab and Catalan.

Equally under dispute is the pot or cassole in which this chef d’oeuvre is cooked. It is agreed that it must be earthenware, made from the local red clay and glazed outside but not in. Originally the pot was a cauldron placed on an open fire of gorse wood collected from the Montaigne Noir (these are some local mountains). I know, I know, but these details are important if you wish to join the cassoulet club. Later things changed and oo la la, the shape – the shape it is everything. It is the shape about which cassoulet connoisseurs disagree. Some advocate the conical pot, narrow at the bottom and wider at the top. This is said to expose the beans to the heat of the oven. Others pooh-pooh this concept and go for a wide round one so that the beans don’t dry out. What is necessary is that the skin that forms as the dish is cooking must be broken and then stirred in again seven times.

I’ll leave the last words to chef Montagné who, in 1928, perhaps in an attempt to pour oil on troubled cassoulets, described the dish as his gastronomic holy trinity:
“Cassoulet is the God of Occitan (Languedoc) cuisine; a God in three persons. God the Father is that of Castelnaudary; God the son of Carcassonne and the Holy Spirit that of Toulouse”
I look forward to tasting all three at the forthcoming Fête du Cassoulet in Castelnaudary at the end of the month. Lots of music; lots of guzzling; Yummy.