I’ve been hard at work this past week trying to get the house ready to put on the market but in between times I met the redoubtable Thomas Grimston who in the late 18th century created the Grimston Yeomanry to defend the Holderness (East Yorkshire) coast against those “demmed Frenchies”. Here’s a snippet from his story.

The threat of a French invasion of England loomed large during the years of the Napoleonic wars and so the bigwigs in the East Riding of Yorkshire set about raising companies of volunteers to swell the military numbers.

Step forward one, Thomas Grimston of …er…Grimston, patriot, aristo and horseman who, at his own expense, raised a volunteer cavalry force. He tirelessly travelled the whole of Holderness explaining his plans to the locals. When his rousing words of recruitment fell on deaf ears he asked the local clergy to call parish meetings so that the importance and purpose of the proposed cavalry could be clearly explained to the bashful locals. Once more he was disappointed. In a letter he received explaining this lack of enthusiasm he was told:

“what they object to is the smallness of the pay, from which circumstances one may, I think, infer two things. First they are aware of the necessity of the Measure and secondly, in return for their services, they expect a valuable consideration adequate at least to the profits arising from labour.”

In other words – when it comes to asking Yorkshiremen to volunteer, you really can’t have “summat fer nowt”.

Eventually though, in 1794 Thomas enrolled around forty men and Grimston’s Yeomanry were ready to ride.

Thomas kitted out his men:

The whole ensemble was then accessorised with a sabre and pistol. 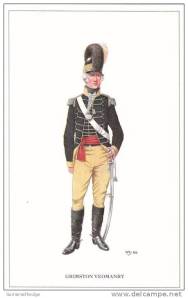 Running a cavalry force didn’t come cheap. The sabres and pistols alone, assuming no fancy additions would cost him around £115, about £11,000 in today’s money.

Having solved the recruitment and equipment issues only one problem remained for Thomas to solve. Every decent cavalry unit needed a shiny trumpet to sound the charge but sadly Thomas could not lay his hands on one. However, his brother-in-law Richard Ledgard came to his rescue in 1795 and from the accompanying letter, one can only assume that his neighbours would have been pleased to see the back of it:

“…have been blasting all my neighbours this hour past…the cord is crimson and buff, very neat…the price is 3 ½ guineas, ½ guinea the string, together 4 guineas. What a tremendous sound they produce. It puts me in mind of what we are to expect at our latter end.”

By the turn of the century the Holderness coast swarmed with volunteer corps who provided much needed support to the regular forces and the militia but the signing of the Peace Preliminaries in October 1801 reduced the need for such strength and vigilance and many of the volunteer units including Grimston’s Yeomanry were disbanded or stood down. This was premature however and in May the following year war was declared again.

Thomas Grimston’s disbanded Yeomanry rode again, now doubled up to two troops, and they charged up and down the Holderness coast looking out for the enemy. But they were a hospitable lot towards civilians although, as this brief diary entry from a Mr Dunn of Patrington shows, perhaps catering was not all it should have been or perhaps it was just too good!

6th June – went to see the troops at exercise. Came on to rain. Dined with the officers in the Mess.

The 1807 Local Militia Act saw the end of many of the volunteer forces as it incorporated a provision that any effective member of a volunteer or yeomanry corps had to serve at his own expense and pay a fee to continue to serve. Whilst many men would have continued to serve they could not afford to pay the fee.

Needless to say,  Thomas Grimston’s gallant Yeoman Cavalry survived  as a unit for a few more years before galloping into the sunset in 1814. 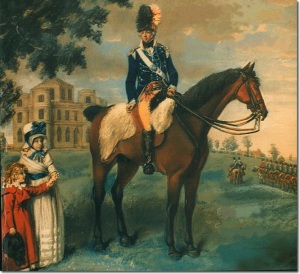